Illahe Nursery and Gardens
My  little nursery is located in the South Salem hills at an elevation of about 600'. In following the sage advice of "buyer beware", I found the remains of a small cherry orchard, with a nearly 100 year old farm house on it, too good to pass up. Of course all of us gardeners research the long term weather data associated with such an important purchase as to where to locate a nursery business.
﻿﻿
﻿﻿


Mine just happens to be in a hung valley, located near one of the highest points in the area. As it happens this little hung valley, is also a wind tunnel, as wind columns rise over the South Salem Appalachia and plummet into the surrounding Albany lowlands.﻿ Yes, I will be installing a wind generator at some point to harness this energy. Let's see, did I mention the frost pocket? Hung valley being a key word here, at close to 600' in elevation, and having an aspect that puts most of the property in the lee of the southward facing slopes. Its a wicked frost pocket micro climate. It will snow here when it is just raining everywhere within a 40 mile radius, it will freeze here when it is much warmer just several hundred feet lower in elevation. But of course, this was all researched well ahead of time and factored in to the design of the nursery.......Ya, that's not really the case, I saw it, I fell in love with it, and I bought it.

But in a twist of fate that I have found my life has a prevalence towards, it turns out this cold, windy, little hilltop valley produces some of the best plants I have ever grown. I grew alpines for some years in a small residential backyard in Portland, Oregon. I would struggle with the challenging ones, Townsendias and Eritrichiums I had nurtured and coddled would suddenly turn to mush overnight in the warm, windless confines of a South East Portland backyard. Nursery and Gardens in late summer
So here I am with a lovely location, a huge stock of rare bulbs and a once again growing collection of alpines that flourish here. I hope to publish pictures of the bulbs as they come into bloom in the garden with information that one might find useful, here in this blog. I hope it to serve as a companion to the catalog that will be out in the fall of 2011.

﻿
So a little bit about myself and my passion for horticulture. It began many years ago as an eccentric uncle sold some property he had in Baja and bought 20 acres on the island of Kauai. He started a palm tree plantation growing huge specimen palms some upwards of 30' tall to sell to the resorts seeking an instant landscape. I worked summers there as a child, sometimes weed eating the grass that you could  literally watch grow between the rows of cultured palms. Kauai is one of the wettest places in the world, and upwards of 600 inches per year fall on the mountain tops of the north shores' Na Pali coast. As time passed and my abilities grew I graduated from weed management to nicking and sowing palm seeds in the shade house. My uncle would come in with a fresh batch of seed that he had travelled days through the jungles of South America or Madagascar to harvest. His stories of having the only seed of this palm in the trade, and how he had survived robbers, venomous snakes, angry natives, and all the treacherous inhabitants of the jungle rain forests sparked the imagination of a young 14 year old tasked with sowing hundreds of these rare treasures.
So it was early on that I learned that some plants have a value not necessarily for beauty alone but so much more for the rarity and the story behind the plant. An appreciation for the uncommon was born there that has never withered. 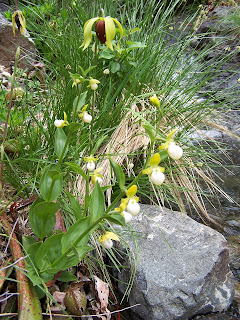 Darlingtonia californica and Cypripedium californicum blooming together 30 miles from the nearest road in the Kalmiopsis wilderness
Time passed on and I knew as I finished up high school that I would like to do something with plants. Science and biology were the two subjects I most cared for whilst stuck in the confines of the public school system. Once freed to pursue the subjects I could choose in college, I delved deep into botany and biology. 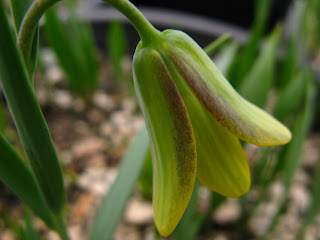 Fritillaria kittaniae
My University experience took me to the foothills of the Bridger mountains to study biotechnology at Montana State. It was there while extracting virus resistant genes from a thousand different accessions of spring wheat, that I discovered I was much happier in the greenhouse and field than stuck behind a microscope in the laboratory. It was back to Oregon State university to finish with a degree in Ornamental Horticulture.
Enter here again the twisted hand of fate, I walked away from school with a head full of knowledge mostly geared towards the operation of those massive production scale nurseries that churn out a billion pansies and petunias a year. As luck would have it, a local Portland botanical garden, specializing in the rare and uncommon, found my abilities as an intern were worth paying for and I was hired as the propagator at the  Rae Selling Berry Botanic Garden. Jack Poff, the aging old wizard who had gardened for Rae herself took me under his wing. His sage advice when I walked through the door on my first day was "Get Propagation of Alpines, by L.D. Hills, read it and then do everything it says". I procured a copy and attacked the massive collection of alpine plants at the garden, combining the ageless wisdom of Mr. Hills treatise, Jacks' sage advice and the production scale techniques that I had borrowed lots of government money to learn. This environment was absolutely perfect for a budding propagator, a largely neglected collection of rare plants, a great facility to propagate with, and every so often a knowledgeable assortment of Portlands Horticultural patrons would stop by and offer suggestions or nod at plants that they wanted to see on the sale table. 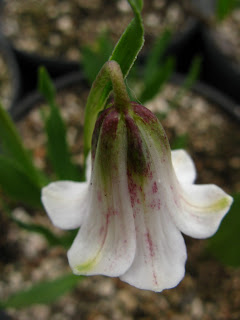 Fritillaria striata
It was in this environment that I first met Jane McGary. I believe it was at a meeting of the Columbia-Willamette chapter of the North American Rock Garden Society. I was extended an invitation to visit her estate garden up on the flanks of Mt. Hood. After seeing her magnificent bulb collection, I knew the true meaning of a "passion for flowers". Most everything I saw that day were specimens I was seeing for the first time ever. Now granted the Willamette Valley is known as a minor bulb producer in the grand scheme, and I have been to the wooden shoe Tulip festival to see acres of Darwins, Double Early's, Lily flowered and Parrot Hybrids. All those rows of carmine red and buttercup yellow couldn't compare to a single sinister specimen of Fritillaria obliqua. I stood mesmerized by the sheer magnitude and depth of her collection. 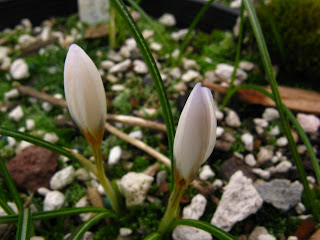 Crocus pestallozae emerging from the February cold
Over the years my career took many twists and turns, taking me from a propagator, to helping manage the gardens and grounds at Edgefield, nursery hand at a Japanese maple and conifer nursery, landscape designer, groundskeeper on 120 year old school campus, carpenter, lab technician, bedding plant producer and finally to my current job restoring Willamette Valley wetlands and riparian habitat and building raingardens and bioswales on a municipal scale. Along this winding road I had the fortune of working in Jane's garden. Sometimes I would move mulch piles and sometimes I would move rocks for her ever expanding rock garden. She was always willing to take a break and go and look over the bulb frames and share her knowledge and stories about the bulbs.
﻿﻿
﻿﻿What an honor it is to have been entrusted with continuing Jane'sannual fall offering of bulbs! I hope you bear with me as the nursery grows, the bulbs settle in, and the list develops.

Cheers to a warm spring!